It has been about half a year since the introduction of PPC Protect to our market began. As of August 16, the # of the monitored trial accounts has risen to 64 (the # of the signups has also increased to 27). Now that you can analyze accounts by industry and ad-spend, I would like to introduce the analysis results in this blog.

Finding1. Overview
Trials have been conducted with a total of 64 accounts since November last year.
The overall results are below:
-Average fraudulent click rate: 4.43%
-Average tool ROI: 401.94%
*1 Tool ROI = (saving cost) / (tool cost)
*2 The tool costs are calculated based on the previous pricing that was used until July.
The discount for a client account with multiple Google Ads’ accounts is not considered.

Some possible reasons behind this are:
Reason1: Japanese domestic accounts (64 accounts) spend less on display ads than global accounts
In a previous survey by PPC Protect, the average invalid click rate for search ads and display ads was 11% and 36%, respectively. Therefore, it is possible that the percentage of display ad-spend with a relatively high fraudulent click rate was small for domestic accounts.

Reason 2: Geographical difference
PPC Protect shows the average invalid click rates for different countries, and it varies from country to country.
It will be a nice idea to dig into this with PPC Protect’s support.

Factor 3: Average monthly ad spends are small
Many accounts have relatively low monthly ad-spends compared to global accounts, which may have resulted in a proportionally lower invalid click rate.

Finding2. # of Monitored Accounts by Industry
With the help of our sales partners, we have conducted free trials in various industries.
1.e-Commerce (EC): 19 accounts
2. automobiles: 17 accounts
3. local business (store): 8 accounts
4. finance: 6 accounts
The above industries represent our top 4 industries which have tried the most free trials so far. From now on, we will analyze by industry and ad-spends so that we can see some trends. 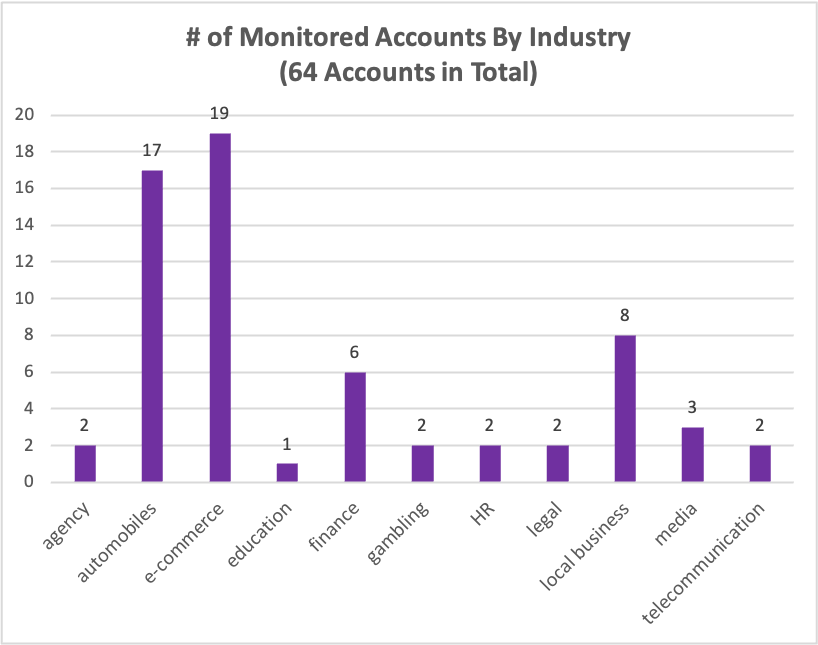 Finding3. # of Accounts by Ad-Spend Range
The volume zone of monthly ad spend has been between 2k-10kUSD per month, which is almost half of all accounts, and the # of accounts with monthly ad spend over 100k USD has been gradually increasing since June. If the distribution of ad spend changes, we may see some changes in the average fraudulent click rate and average tool ROI. 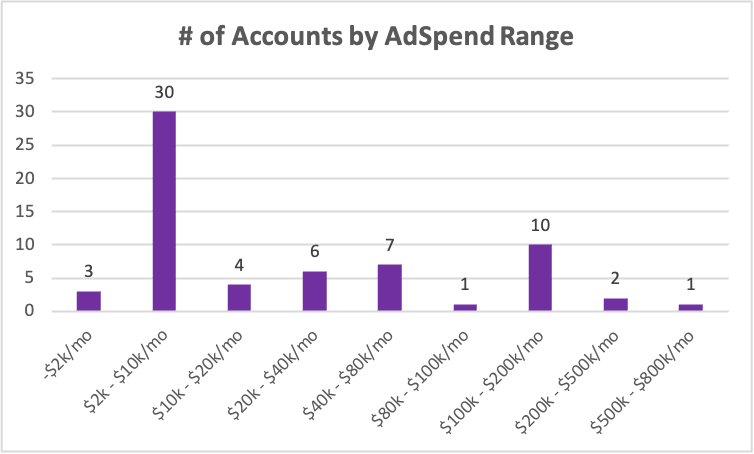 Finding 4. Average Fraudulent Click Rate by Industry
Similar to the results of PPC Protect’s 2020-2021 report, we found that finance has the highest average click-fraud rate. Overseas, the education industry was at the top of the list, but we need to increase the number of accounts in the industry in Japan to confirm the trend. 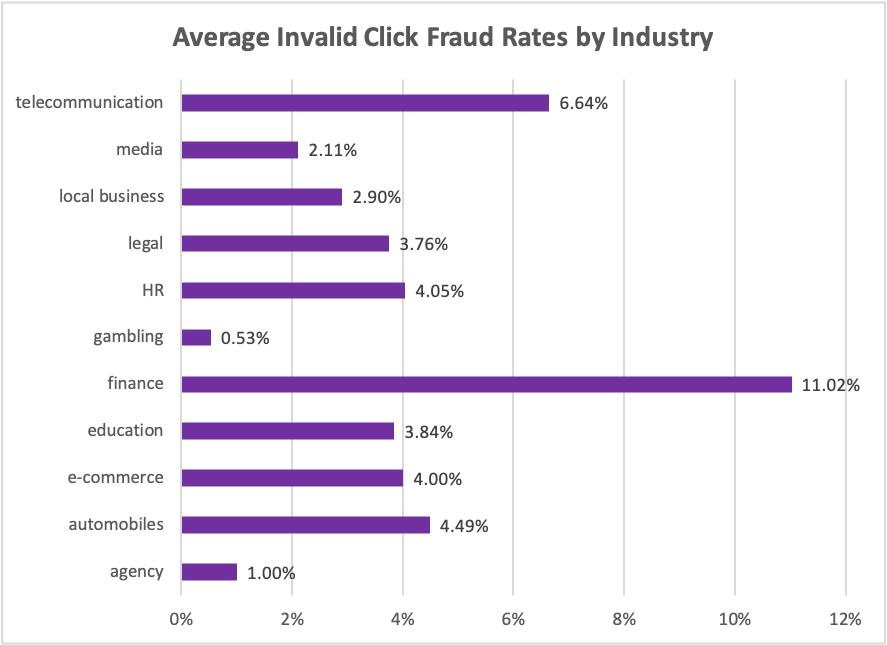 Finding 5. Average Tool ROI by Industry
Basically, the tool ROI seems to be proportional to the fraudulent click rate. The telecom and gambling industries are way above the average tool ROI, but since they are still two accounts each, we cannot judge them as trend values. However, the financial industry (6 accounts) has an average tool ROI of over 1,300%, so it can be considered as an “industry account to try first” when proceeding with the trial. 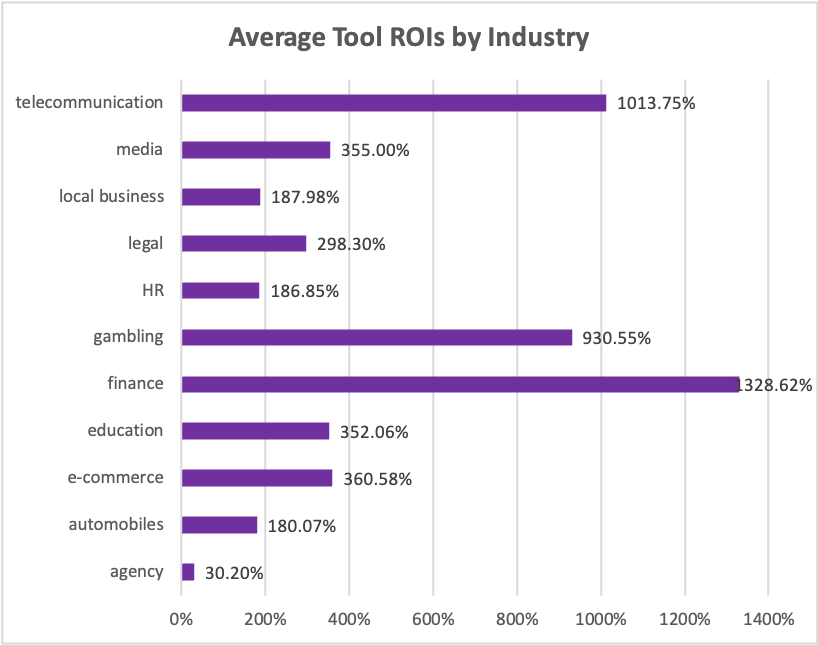 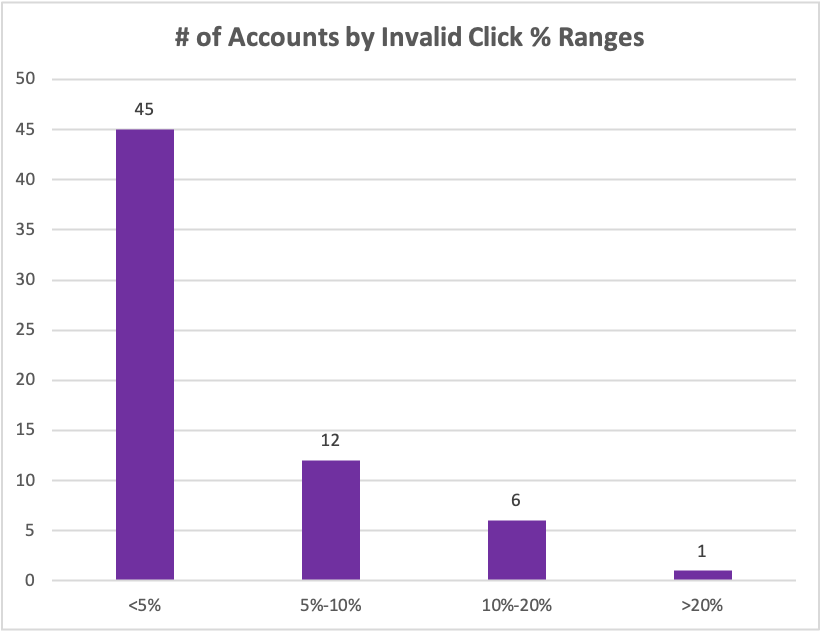 Finding7. # of Accounts in Each Tool ROI Range
Half of the accounts have a tool ROI of less than 200%. Considering our new pricing table that will be applied in August and the commissions and margins of our sales partners, it can be safely said that about half of the accounts would not find the tool cost-effective. 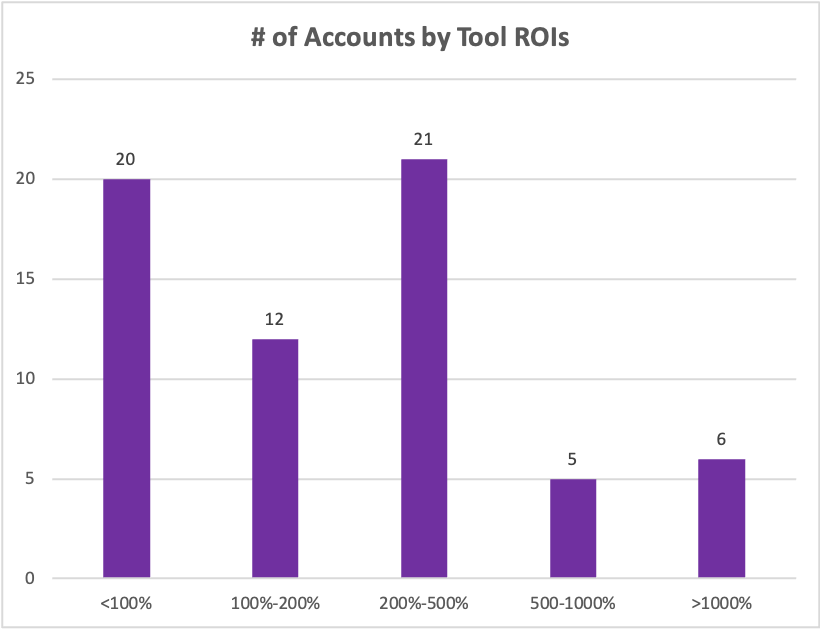 Globally, the # of accounts implementing PPC Protect’s solutions has reached 85,000. The truth is that we have not yet been able to introduce this service to that many accounts in Japan since March. Though we do have some conditions for running a free trial, but if you’re interested, we’d love to give it a try!