Stay tuned by taking a look at our business updates. Moreover, there will be some useful information for you.

m19 has developed and released a number of new features (all of which are not available on the Amazon platform) that will be beneficial to the many Amazon sellers who are using m19 in 2022. Whether you are still considering m19 or are already using it, we hope you will find this information useful and informative!

In January 2022, in addition to inventory reports, we started providing inventory thresholds and low inventory alerts. The Inventory Report allows you to check the quantity and value of inventory for each ASIN. （The report can be filtered by product group, switched from quantity to value, and vice versa, and the report can be downloaded.

A low-stock alert feature estimates how long inventory will last based on current inventory and the number of orders in the last 30 days. You can also set an inventory threshold, and the algorithm will pause the campaign when inventory falls below the threshold.

Many clients have asked for a feature to compare the competitiveness of keywords. Therefore, m19 downloaded Amazon’s search frequency rates daily to compare keyword rankings over time. The Keyword Extraction tab allows users to enter keywords or add new products to compare similar products and similar keywords based on similarity ranks.

They have also created a site that can be used with or without m19. 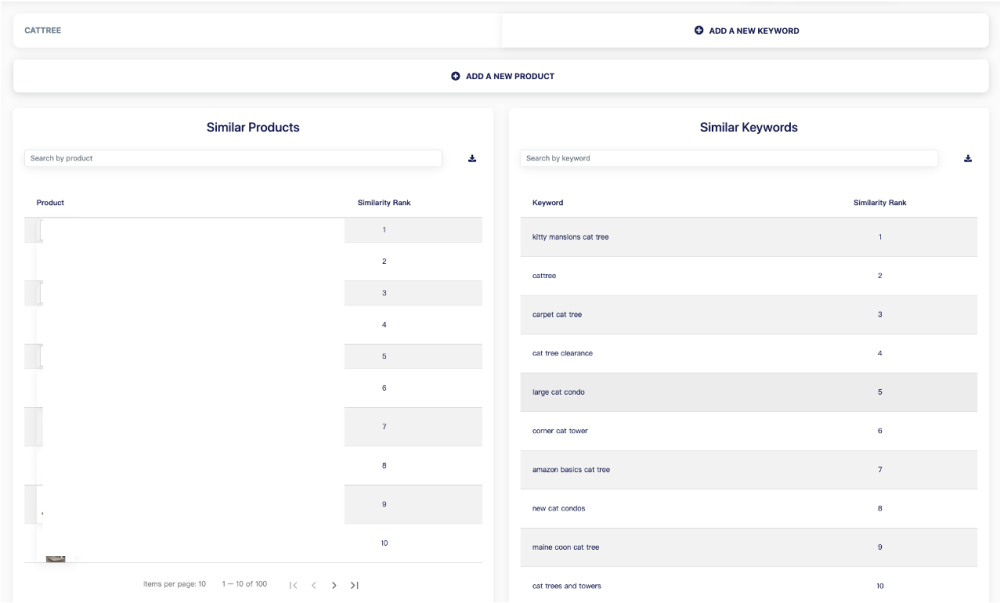 Total Conversion Rate is a concept in m19 that is a bit similar to Conversion Rate and is not listed in Amazon’s ad console. m19 states that TCR = Total Orders (via Sponsored Ads + via Organic Search) / Total Sessions, which compares conversion performance via organic search and via Sponsored Ads. This concept is useful for comparing conversion performance via natural search with that via sponsored ads.

For example, if TCR > CR, then OCR (Organic Conversion Rate) > CR, meaning it is favorable for the brand as a whole.

In the summer of 2022, Amazon began providing partners with hourly statistics for sponsored ads. First in the US, CA, and MX marketplaces, and now that data access for other markets has been released to partners, m19 has developed a new feature: hourly stats. This is a new feature for all marketplaces (except India). With “Statistics by Time Zone,” you can monitor the performance of your products and strategies on an hourly basis, pausing and starting ads at different times of the day. Time zones are displayed in the time zone set by each marketplace.

The time-of-day delivery feature allows you to select specific time zones to disable strategies, saving you money if your cost-per-click is too high and your ads are not generating enough sales. 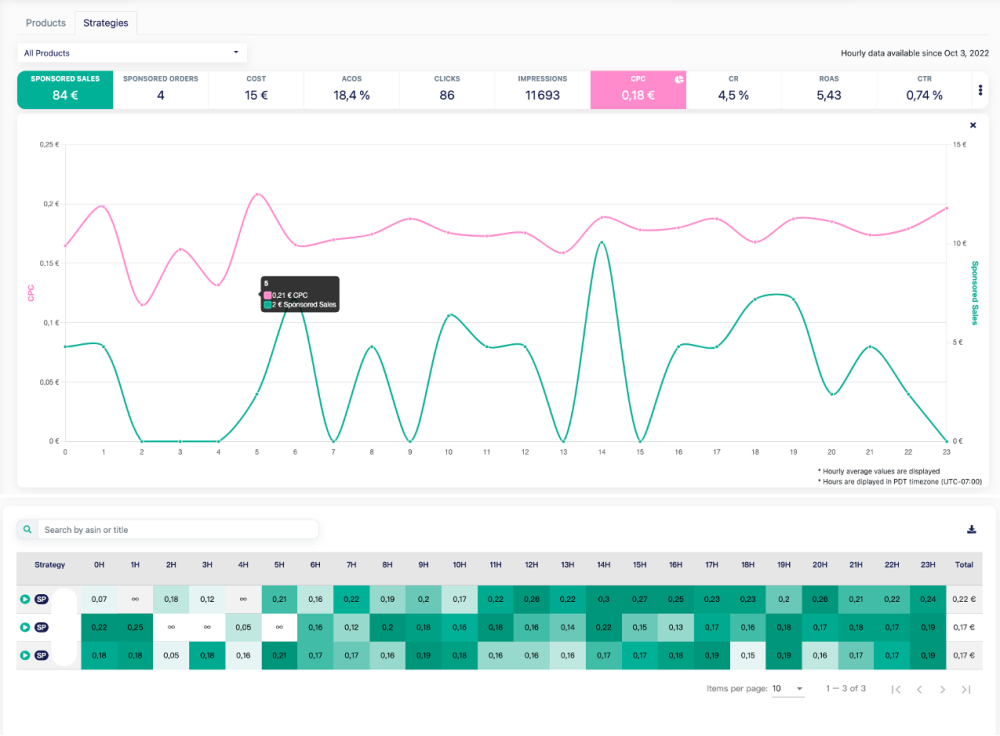 This feature increases (or decreases) a strategy’s target ACOS when boost is enabled. The user can define the magnitude of the increase, which will automatically return to the initial target ACOS value once Prime Day or Black Friday is over.

For Prime Day boosters, the target is set slightly more conservatively for the two days following Prime Day. This is done to balance the increase allowed by the client during the Prime Day period. 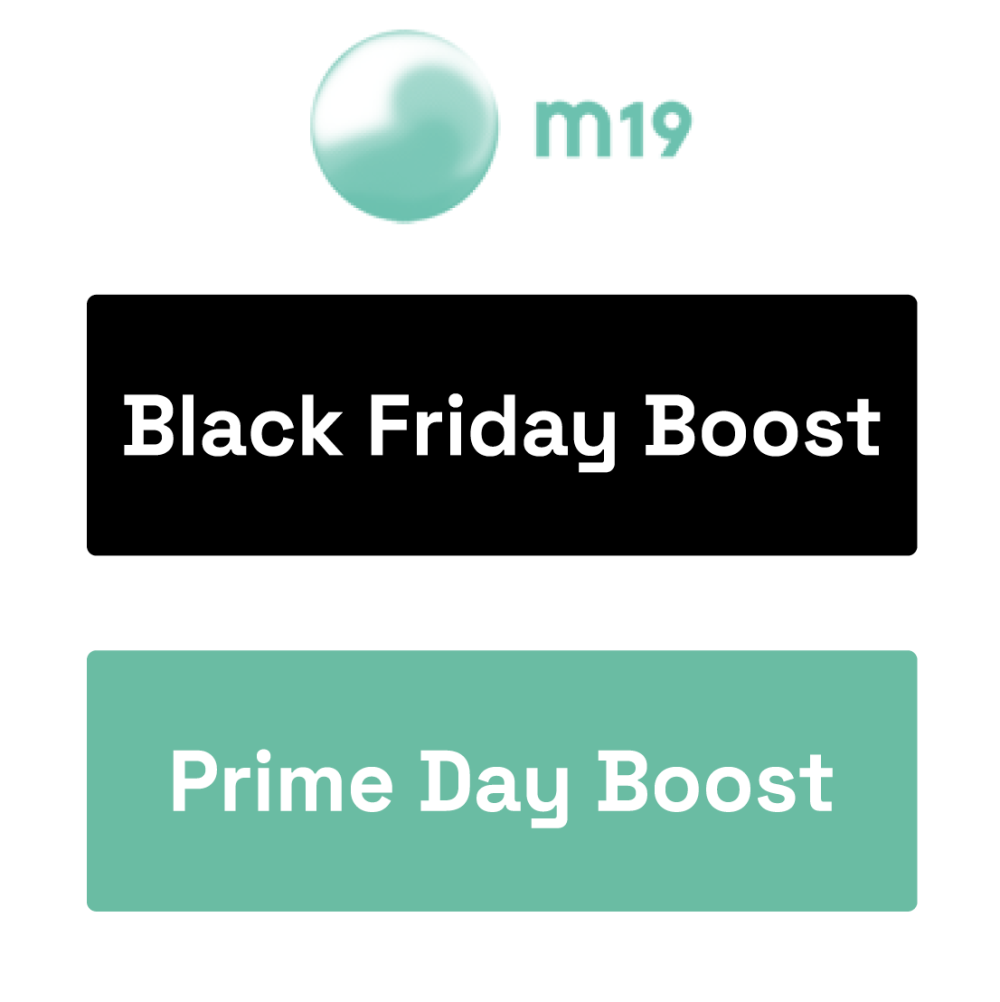 Due to many requests from clients, m19 has developed a new feature called Top Search Display Boost. After a client creates tactics, they can turn on boost if they want their ad to appear at the top of search.

The algorithm will increase the budget by 200% of the current budget so that the ad appears at the top of the search. On the other hand, the target ACOS will remain the same, so the algorithm will lower the bids for other tactics. The advantage of m19 is that it can be implemented on a keyword-by-keyword basis rather than on a campaign-by-campaign basis.

To allow you to better analyze the placement of each campaign, m19 has also developed a Placement Stats feature. Click on the icon to open the placement details to see how the strategy is performing on top searches, product pages, and other searches.

m19 will continue to develop and release many useful functions for sellers and advertising agencies in 2023.